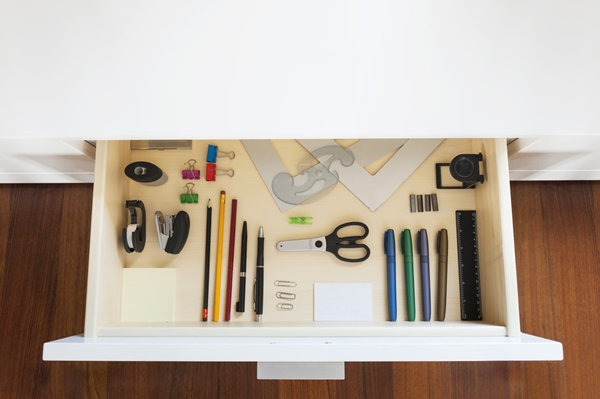 You, like most people, probably use a pen or a pencil to compose your letters and other correspondences. People have been writing since nearly 3000 BCE, the Ancient History Encyclopedia notes, and as language changed, so did writing instruments.

In the early years of writing, people didn’t use ink or lead to make markings on paper. Instead, a stiff tool, like a reed, was used to carve markings into wet clay. This form of record keeping can be seen in ancient Egyptian hieroglyphs and Mesopotamian cuneiform. Eventually, people evolved from scratching messages into clay to working with a lead stylus.

The lead in the stylus was eventually replaced by graphite in the 1560s, the The Museum of Everyday Life notes. Graphite worked better for writing because the lines came out darker and it also happened to be safer for the human body. The technique of encasing the lead in wood was later implemented in the 18th century, making the material easier to grip and leaving less debris on the writer’s hand.

During the writing tool’s youth, knowing how to write the alphabet was the sign of a scholar, as a majority of the population was illiterate. However, according to HISTORY, today, around 8 billion pens, pencils, markers and highlighters are sold each year, and people all over the world are given the opportunity to record their own stories with the modern product of these historic writing utensils.

The importance of writing utensils
Along with the opportunity to effectively record history, writing tools serve other great purposes as well. For instance, Adm. Chester Nimitz used a Parker fountain pen in 1945 aboard the USS Missouri to sign Japan’s surrender during WWII, reported The Wall Street Journal. This signature was a sign of peace and the end of the war.

To commemorate the 70th anniversary of the treaty signing, the USS Missouri Memorial Association requested the pen, which was on display in the Nanjing museum, be brought to Hawaii. The association wanted to have a large celebration with wartime relics available for viewing. The Chinese Embassy agreed to loan the pen to the U.S. for the event, but the pen will be returned to China after the celebration.

Writing utensils serve great purposes by allowing humanity to record history and effectively communicate over long distances. The next time you pick up your writing utensil to write on your personalized stationery, take a moment to appreciate the history behind the instrument and what it represents.